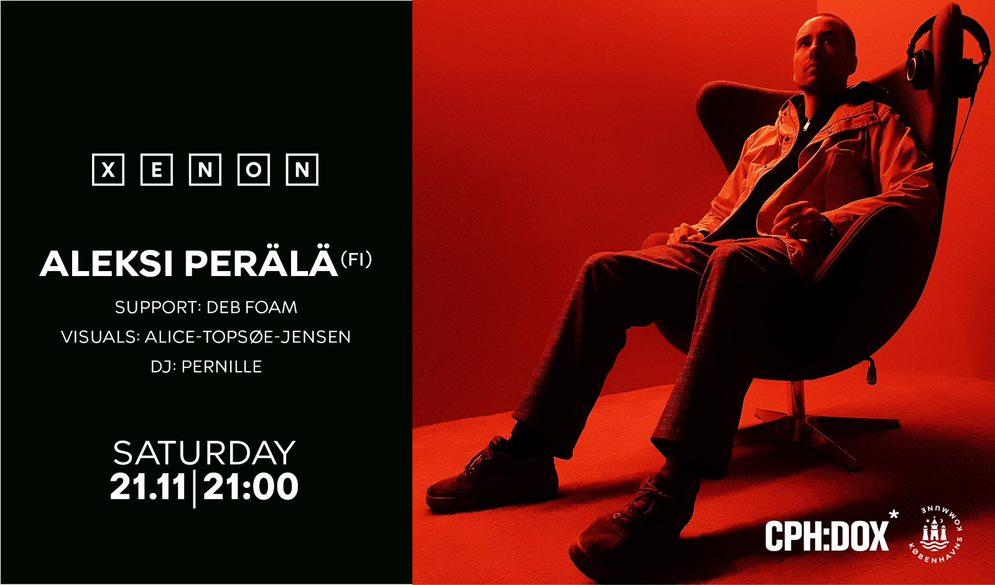 The concert will unfortunately be postponed to 2021 due to COVID-19 restrictions. We will be back with a new date soon.

The concert is part of CPH:DOX and their AUDIO:VISUALS concert series. CPH:DOX is one of the largest documentary film festivals in the world. The next edition of CPH:DOX takes place March 18-29, 2020.

AUDIO:VISUALS invites you to immerse yourself into unique performative experiences that combines visuals and music in special venues and unusual settings

Born in Finland in 1976, Aleksi Perälä has been an independent producer and a electronic music composer for over 20 years.

His latest album is the first LP release for the Clone Basement Series, exploring the spiritual side of techno with the Colundi Sequence- showcasing the multiplicity of emotions and conditions as defined through the Colundi Scales; 128 resonant frequencies chosen via experimentation and philosophy, each relating to a specific human bio-resonance, psychology, traditional mysticism or belief, which does you good whether you like it or not…

Heavy, raging, and introspective industrial techno founded on aggressive baselines and heavy beats where tribulations of everyday life is ripped apart. In April 2019 Deb Foam released her debut EP ‘Cleanse’. Through four tracks of glass-shattering highs and trembling lows, feelings of heartbreak, rage and chaos are explored in its fullest extent, and a deeply personal world is disclosed.

Alice Topsøe-Jensen (b. 1994) attends the second year at the Royal Danish Academy of Fine Arts. Previously, she has worked with light, sound and animation, and has recently started working with text. Often, manipulated avatars found on the web have carried the narrative and at other times have been the focal point of her work.

Topsøe-Jensen is interested in otherness, emotions, mental illness and psychology as a system and power structure. Situations are conveyed through a clinical sci-fi-mac-pro-hospital aesthetic, and the focal point has recently shifted from patient to caregiver, and from synthetic antropomorphic figures to computer generated ‘natural’ environments.

Starting to teach herself animation, Topsøe-Jensen found infinite opportunities in creating a world from nothing, in a place where there could be no gravity and a thousand suns. She has worked with the 3D aesthetics both as a dystopian mirror of the emptiness in todays society, but also created 3D plants and amoeba that made up a utopian atmosphere, inhabited by aliens whose life goal is to take care of each other and the nature.

Topsøe-Jensen has exhibited her pieces in small art galleries and exhibitions, but also worked with visuals and light installations in bigger places such as Iceland Airwaves, Roskilde Festival and DR koncertsalen. Her work is often collaborative and she has worked with musicians, sound artists and techno producers, but also social workers, graphic designers, tech people and other visual artists.

DJ: PERNILLE KROG MOGENSEN
Pernille Krog Mogensen is a well known and respected figure in the Danish music scene. Formerly working as the head of music for the Danish festival Strøm, for almost a decade, Pernille’s sheer depth in musical knowledge has led her to work in various well-respected music projects around Europe, including her own radio show, ‘Mango Drive’ on Heartbeats Radio. Her enthusiastic support of underground electronic music has no doubt helped expand the influence of Danish music culture into new territory.